The disgrace of 1842 – Miss Massey’s name had almost been forgotten, except for one mention from the court records. She was found to be drunk, and alongside her friend, Miss Ann Smith appeared before the magistrates, who ordered them both to leave the city.

The newspapers mention very little about what went on. However, in 1845 the Clergy of Coventry and a resident shared their views, with some clue as to what may happend. This was followed by a flurry of letters published in the paper with a heated debate on how Lady Godiva should be portrayed.

A few years later on the 26th May 1845 – The person representing Lady Godiva in the Procession, be dressed in such a manner as shall not be offensive to the feelings of any Person of true delicacy. That in the choice of an Individual to represent that character, care shall be taken that she be not a Person of bad reputation.

She was a beautiful young creature, of pretty womanly stature, and her deportment was alike free from all mere affected modesty on the one hand, or bold levity on the other. Sober and dignified in her behaviour, she did herself credit in these respects and gave to no one just cause of complaint. Her identity was kept a strict secrete, all that can be said is she arrived and departed on a train set for London. 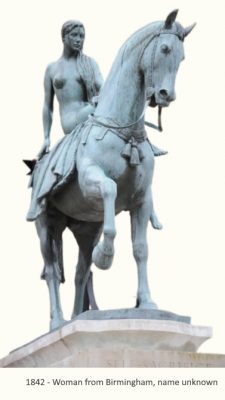 "Sir, We the undersigned Clergy of the City of Coventry, have heard with much regret that it is proposed during the approaching fair, to get up a procession similar in character to hose by which the streets of this City were disgraced in 1842 and 1844. It is not necessary for us to refer particularly to the circumstances which make such an exhibition a disgrace to the moral character o the city, and a direct insult to the Christian feelings of a large portion of the community; those circumstances seem to us to be of such a nature as to admit the active interference of the civil power to prevent their recurrence; and we respectfully request you, as the Cheif Magistrate of theCity, and through you, your brother magistrates, to interpose your authority in the matter calculated to have important an influence o n the public morals."

"...it is strange that the ladies of Coventry do not use their influence to annihilate the "CARNIVAL OF STATAN..."

"Sir, My attention has been called to a custom which, I am told, prevails at Coventry every thrid year, and which is so offensive to every right feeling, that I could not have believed it to have been permitted in a civilized and christain country, if I had not received my information from what appears to be a good authority. It is stated to me, that every third year a common PROSTITUTE is hired at Birmingham, for the purpose of being paraded through the streets of Coventry as representative of Godiva. That said PROSTITUTE is dressed in a tight fitting dress of flesh colour, so as to give her the appearance of being naked, and is of course followed by a mob of the lowest rabble of Coventry. Such is the statement which has been made to me, and which , very probably, may not be founded on fact; but, in case it should be, I feel that it is nothing more than my duty, strongly to represent to you, as Chief Magistrate of the City, that a custom which is, I believe, contrary to the law, and i am sure contract to the gospel, and which must be revolting to the decent feelings of all the respectable inhabitants of Coventry, ought no longer to be permitted to prevail; and I am induced thus early to communicate with you upon the subject, because I think that, if you determine no longer to permit such a violation of decency and good order, the sooner you give notice of your intention the less likley will it be to meet with opposition from the low and profligate, who only could regret the absense of an exhibition so disgraceful to those who attend it, and, allow me to add, not creditable to those who permit it."