Gladys Mann was a Coventry woman, an actress, and the daughter of Alderman Cleverley. This time Godiva was represented as fully clothed in a white and gold dress, symbolic of chastity.

Even Gladys was unsure if this was in the tradition of Godiva, however it was the view of the committee to have a more mature, educational pageant.

Over 500 war heroes and widows were invited to the city to view this special Peace Pageant. Sadly the parade was marked with frustrations. Unlike previous years where the parade went on for hours, this time the whole parade passed by in 10 minutes. By early afternoon it began to rain heavily, with the remaining program canceled.

From the newspapers, there is an underlying sense of frustration about the type of parade, the length, and that it should have included soldiers. Plus the poor weather at the time.

By 11.30 pm riots broke out in Broadgate and lasted for 3 nights. Whilst shocking, similar riots had occurred across the country in many cities. The general cause was a sense of deep frustrations that had been building since the war had ended (economic and social issues). 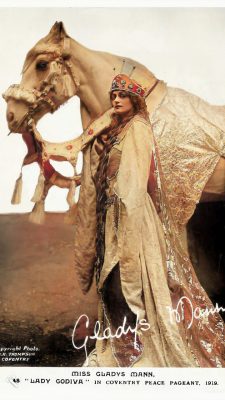